Once there was a User on the Web. They were careless but resourceful and one day they heard a Rumor that something important could be found on a brand new Platform. With Inﬂuencers to guide them and Mutuals to offer moral support, the User was determined to brave Threats and Toxicity to get to the bottom of this Rumor. That journey would prove to change the User forever...

Players control online forces that push and pull a non-player User character through a modern folktale about life on the web. To do this, they play as five unique player roles:

The Platform is a candy house of digital delights.

The Influencers are witches with distracting sweets.

The Scammers are wolves in electric sheep's clothing.

The Trolls are angry mobs shouting from a place of safety.

The Support is the friendly, digital woodsman.

These roles guide the User through the story by making moves, actions that push the narrative. Every move makes the Web a little more perilous. Some moves may force another player to switch roles. This is good, because it emphasizes different perspectives during the game.

As a player, it’s your goal to get the User into trouble, then see if they can get back out. Make resourceful decisions for the User, but make plenty of careless decisions too.

And above all: tell a story about the strangeness of life on the Web!

Once Upon the Web uses a diceless narrative engine. Beyond the download file, the only thing you need to play is a pen or pencil.

This game was created for Folklore Jam 2019!

In order to download this game you must purchase it at or above the minimum price of $2 USD. You will get access to the following files:

Support this game at or above a special price point to receive something exclusive.

In Once Upon the Web, you weave a modern-day cyber-folklore on the interwebs with two other friends. You don't control the user/protagonist, but instead take on the roles of forces that manipulate them. The game is very thematic, with roles such as influencers and trolls. The theme is backed up with mechanics, with influencers being able to give hot takes, and the trolls spreading fake news. I especially love how safety/support tools are worked into the setting, with Ctrl+Alt+Del being the equivalent of X-card, amongst other tools.

A delightful reframing of modern technological anxiety as a Grimm Brothers fairly tale. I love that that subject of the story is shared and the players primarily take on the roles of the archetypal supporting cast. 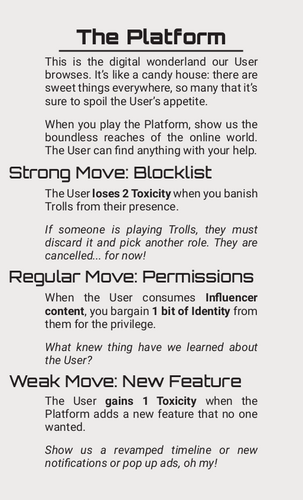 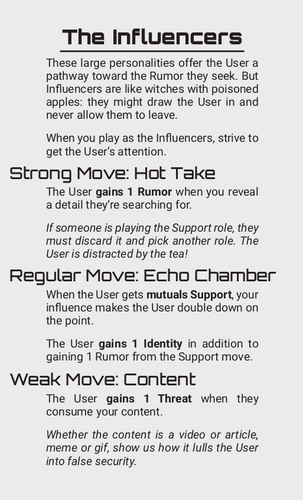 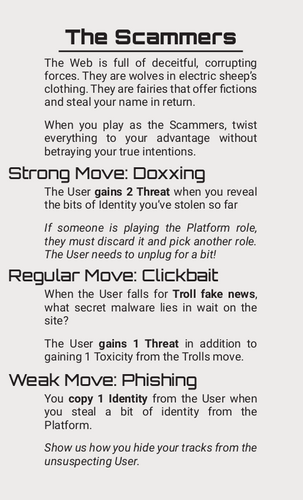